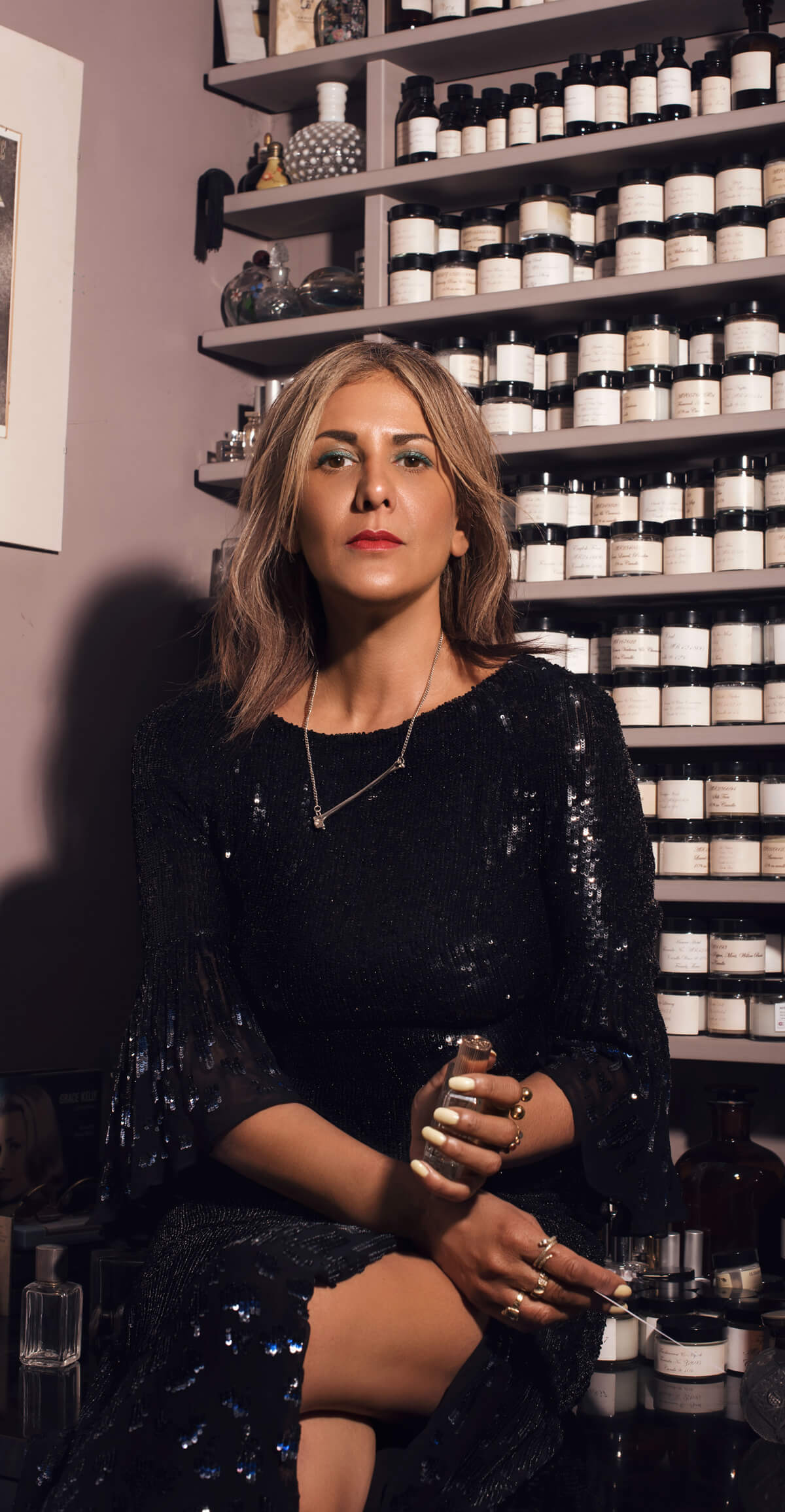 Azzi’s creation of bespoke scents for actors and her innate ability to translate character into scent led to her working creatively in film scent.

Alice Through the Looking Glass, Enid Blyton, Fantastic Beasts and Where to Find Them, The Crown, The Young Pope, Kingsman, Gravity, The Lone Ranger, Great Expectations, 55 Steps, The Dirt, Mary Shelley, and Genius with Jude Law

“Putting together a character is all about layering up in one direction and stripping down in another. When I worked with Azzi and was able to create bespoke scents for the writer Thomas Wolfe it was a detail I never dreamed I could add. Ones smell says so much on so many deep levels. Being able to affect those around you when you’re playing another person has a profound influence on how far you can disappear into that person”.
Jude Law

Azzi collaborated with Director Matthew Vaughn to fully explore the character and lifestyle of the Kingsman.  The chosen crafted masterpiece is based on his virtual DNA print – elegant, provocative, and intellectual. The fragrance exhibits his heritage and combines hand-picked ingredients, capturing the Kingsmans’ mystical essence.”

“As Matthew had already breathed life into the character of the Kingsman, my mission was to embody his personality and unique style, lifting his character from fiction to life through my nose.”
Azzi Glasser

“In the new movie, the Kingsman Eau de Parfum plays a unique role – which called for an extraordinary person to bring it into the real world. Smell is an impossible sense to convey on film and I knew that Azzi Glasser was the only person who could create a fragrance that could transport you directly into the world of being a Kingsman.”
Matthew Vaughn

In music she has created scents for rock bands and worked with singers, musicians and music producers to translate their musical notes into fragrance notes

“The Sequoia Wood fragrance is so unique. I get endless comments on it. To see folks’  puzzled enjoyment of its mystery is exactly how I want to be thought of.”
Adam Lambert

“i never feel fully dressed or go on set without my perfume. It’s a protective cloud, invisible armour, emotional touchstone, and part portal to make believe land. Some people say the past is another country and in a way she makes passport perfumes. I know she always makes them with passion and love – and that cleverest and sensitive, poetic nose of hers.”

“Azzi possesses a certain sorcery, in that she is capable of capturing the perfect essence of a character in scent. So much so, three hundred years ago I suspect she would have been hung for witchcraft. Azzi’s ability to conjure the redolent quintessence within the form of a fragrance is akin to poetry.”

“Azzi is a genius, I’m so glad our paths crossed. For my work she helps me discover and explore a character emotionally through scent. Her intuition is perfect. And for myself, she gave me my Bespoke Perfume; the rest is history.”

“Sometimes serendipity really happens. I found myself being introduced to Azzi, falling into conversation with her and plunging in love with the way she approaches scent all within ten minutes.”

“Putting together a character is all about layering up in one direction and stripping down in another. When I worked with Azzi and was able to create bespoke scents for the writer Thomas Wolfe it was a detail I never dreamed I could add. Ones smell says so much on so many deep levels. Being able to affect those around you when you’re playing another person has a profound influence on how far you can disappear into that person.”

“A SCENT CAN MAGICALLY TRANSPORT ONE BACK TO MEMORABLE MOMENTS IN TIME; MOMENTS THAT DEFINE US. THE UNIQUELY CRAFTED SCENTS BY AZZI ARE PRECIOUS TIME- CAPSULES THAT CAN MAKE EVERY MOMENT MEMORABLE.”