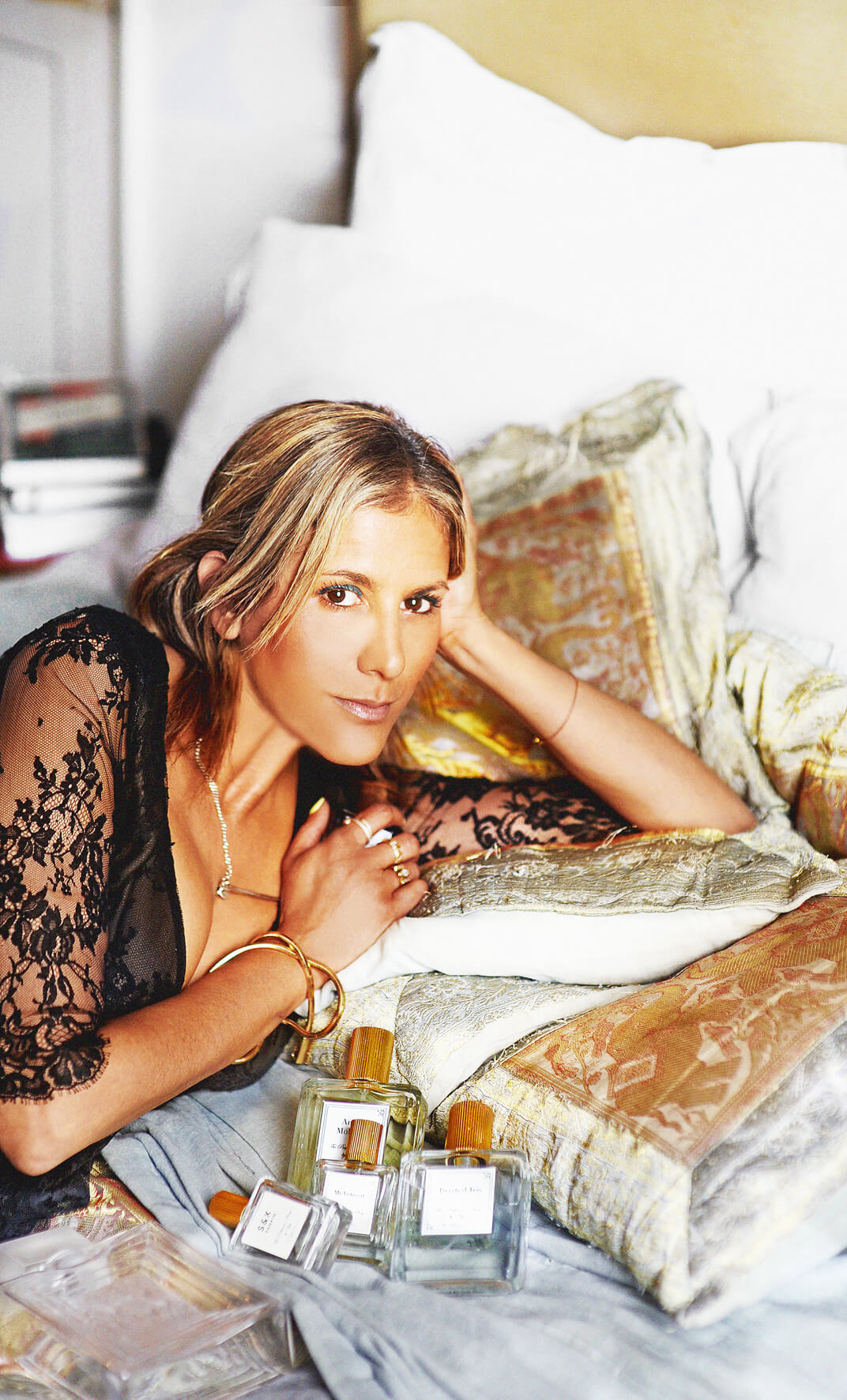 Azzi Glasser has been a rebel in the traditional fragrance industry for over 25yrs. Becoming a Creative Director at 23yrs, she later successfully co-founded Agent Provocateur and Bella Freud fragrances. Her unique creative approach to fragrance has enabled her to develop a bespoke fragrance business with an enviable iconic client list, resulted in winning 6 FiFi awards and published globally including Vogue, Marie Claire, Tatler, Harpers Baazar, Grazia, Elle, Cosmo and GQ.

She works with Hollywood A-Listers and Musicians, developing personal individual scents for them but also character fragrances that help transform them into their roles or add a scent dimension to their music. Clients include Johnny Depp, Helena Bonham Carter, Cindy Crawford, Kylie, Orlando Bloom, Adam Lambert, Stephen Fry, Jude Law among others.

Azzis’ work with artists is conceptual, translating themes into scent. She has collaborated with the most famous galleries and artists on a global level creating bespoke fragrances for art exhibitions, including ‘Build and Destroy’ at the Saatchi Gallery, ‘Daydreaming With James Lavelle…’ at London’s Haunch of Venison Gallery and also in Hong Kong, Philippe Parreno for the Palais de Tokyo, ‘Daydreaming with Stanley Kubrick’ at Somerset House, Kylie Minogue for the V+A Museum, ‘Ditch’ for Music director Jonas Akerlund for the Grammy’s, The scent of ‘Home’ for the opening of the London Design Festival in Trafalgar Square and ‘Meltdown’ festival at the Southbank Centre. She collaborated with Anthony Gormley for his exhibition at the Royal Academy, creating the scent Iron in respect to the material he is famous for working with. For Azzi’s outstanding contribution to British Creativity she was asked to participate in a government initiative to showcase British talent – The Great British Festival of Creativity.

She connects with designers, having scented shows or created fragrances with Alexander McQueen, Jasper Conran, Nicole Farhi, Lucy in Disguise, and Bella Freud. Her understanding of the connection between scent and emotion, has helped her translate the character and ambiance of hotels and clubs into fragrance. She has created the signature scent for the Dorchester, Annabels’, The Mandrake, The Chiltern Firehouse, Quo Vadis, Sketch and the new Louie nightclub among others.

In 2016 she launched her long-awaited own brand, The Perfumer’s Story.

Her goal was to create beautiful fragrances that bring joy into people’s lives, redefine the scent experience and tell stories in scent. Seeing that it was hard for people to find their signature scent, she has created a range inspired by character and style, rather than families to make it easier to connect and find your signature fragrance and build a perfume library for every personality, mood, and moment.

For Enquiries and Stockists please email